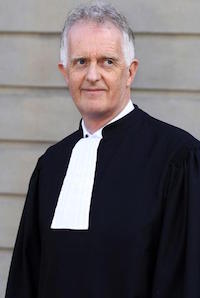 At the end of June, communications consultant Monica Leech lost a high-profile libel action against the Irish Independent; in essence, the jury found that the article in question by Frank Kahn did not bear the defamatory meanings which she had sought to attribute to it. Given the profile of the case, there was much media (Breaking News | Irish Independent | Irish Times (sub req’d) | Irish Times (sub req’d) | RTÉ) and online (Blurred Keys | JC Skinner | Of Laws and Men | Our Man in Gdansk) reaction.

However, there is more to the case than the newsworthiness of a high profile libel loss. In fact, Mr Justice Charleton (pictured above left) made an important ruling during the course of the trial, which as Mary Carolan pointed out in the Irish Times the following Saturday gives more leeway to media on libel defence (sub req’d). The Best of Both Worlds described it as a slight gain for free speech. I think it is rather more than that. I think that it is an important affirmation of the acceptance into Irish law of a defence (which the judge called a “public interest” defence) which has been developing and strengthening elsewhere in the common law world.

… a public interest defence can arise where the subject matter of a publication, be it an article or radio or television report, considered as a whole, was a matter of public interest. … there is a professional duty on the part of journalists to both seek out information that is of public interest and to impart it to the public and that while that is a matter of for professional skill and training, that it is also a matter of responsibility. And once a public interest is established in terms of the information the subject matter of the article, there is a second test to be met, which is as to whether on the evidence the steps taken to gather and publish the information were responsible and fair. The question may need to be put as to whether a newspaper, or a television channel or radio channel, on the evidence behaved fairly and responsibly in gathering and publishing the information. And that may indeed take into account some of the tests set out by Lord Nicholls in the Reynolds case [Reynolds v Times Newspapers [2001] 2 AC 127, [1999] UKHL 45 (28 October 1999))]. In particular … whether the article contained the gist of the Plaintiffs side of the story, and whether the Plaintiff was contacted for comment. … third … in considering whether there was fair and responsible conduct … the decision-maker … has to have regard to the practical realities of news gathering. In that regard, I note what Lord Nichols says … that urgency can be a matter of importance in news reporting, which is, of course, dealing with a perishable commodity.

And he concluded on this point:

A public interest defence, if pleaded, should be particularised in reference to the overall test, which I have approved, as set out in Jameel and, if necessary, with reference to the individual points set out helpfully by Lord Nichols in Reynolds. But these are not necessarily determinative.

This is very important. It builds upon the decisions of the House of Lords in Reynolds v Times Newspapers [2001] 2 AC 127, [1999] UKHL 45 (28 October 1999)) and Jameel v Wall Street Journal Europe [2006] 3 WLR 642, [2006] UKHL 44 (11 October 2006) which recognised a qualified privilege for responsible journalism where there is a real public interest in communicating and receiving the information, and the publisher has taken reasonable care to verify the information published. Reynolds had been referred to with approval in Ireland in Hunter v Duckworth [2003] IEHC 81 (31 July 2003), but that was probably obiter (as that case is about the protection of the defendant’s opinion, and the expansion in libel defences illustrated by Reynolds and its ilk was cited by the defendant by analogy in support of his proposition that his opinion should be constitutionally protected, not that he should be able to rely on a Reynolds-type privilege). Hence, this reaffirmation is welcome.

Reynolds, for all its advances, tended in practice to be applied in a rigidly formulaic fashion. To be fair, Lord Nicholls speech (at [2001] 2 AC 127, 205) – where he set out ten criteria to be applied to determine whether the matter was in the public interest and whether the journalist had acted responsibly – lent itself to this construction. But it was never intended to be the kind of comprehensive technical almost statutory formula that it had become in later cases; and Jameel (re)injected some common sense eschewal of technicality, directing attention and analysis away from the 10 criteria to the underlying questions of public interest and responsible journalism; hence, though the Reynolds continue to be relevant, they are neither exclusive, nor comprehensive, nor determinative. It is clear and very welcome that Charelton J is following Jameel first, and only then and if necessary the Reynolds criteria in a non-determinative way.

This promises to liberalise Irish defamation law quite significantly. For example, note that Charleton J at all times characterised this as as “public interest defence”. In his opening paragraph, he said that the issues before the court included “did a defence of public interest exist in defamation proceedings …?” Right from the off, and throughout, he called it a “public interest” defence. That description is potentially very wide indeed. However, even if this is an appropriate shorthand description of the defence, in the extract quoted above, he also held that various further criteria must additionally be satisfied.

Duty
If this defence is a species of qualified privilege, then the speaker must have a duty or interest to speak and any hearers must have a duty or interest to hear the speech in question. But many of the cases on this defence have quite simply tied themselves up in knots on this question of qualified privilege, not just the Court of Appeal and the House of Lords in Reynolds but also other common law courts such as the New Zealand Court of Appeal in Lange v Atkinson [1998] 3 NZLR 424 and [2000] 1 NZLR 257 and the High Court of Australia in Lange v ABC [1997] HCA 25; (1997) 189 CLR 520 (8 July 1997). As a consequence of these unnecessary analytical knots, the House of Lords in Jameel quite rightly moved decisively to separate the Reynolds defence from qualified privilege, and to establish it not as a species of privilege but in effect as a new stand-alone defence which had evolved from privilege.

Unfortunately, Charleton J was inconsistent on this issue in Leech. On the one hand, he held that there is a professional duty on the part of journalists to both seek out information that is of public interest and to impart it to the public; and this criterion, redolent of qualified privilege, is very reminiscent of Reynolds. Moreover, he also referred to the Reynolds expansion of the “general interest in the public in favour of them receiving information”. On the other hand, at a later point in his judgment, having referred to Reynolds and Jameel, Charleton J said that he thought that “any reference to the principle from which this is derived, namely ordinary qualified privilege, arising in private circumstances, is, as Lord Hofmann says [in Jameel], not necessarily helpful.” Moreover, one of the reasons why the the Court of Appeal in New Zealand has had great difficulty in maintaining its qualified privilege analysis in this context is that it has encountered real problems on the issue of how malice defeats the defence, and Charleton J himself adverted to this: ” It seems to me that one aspect of the test for qualified privilege, which is the issue of malice, is probably replaced in the test for a public interest defence, as set out in the head-note of the Jameel case, with another test which involves the issue of professional conduct by the reporting journalist or other party.” It would have been better if he had taken the step indicated in particular not only by Lord Hoffmann but also by Baroness Hale Jameel and eschewed entirely the language of qualified privilege, which can only be complicated and misleading in this context.

There is an important consequence in this approach for bloggers. A strict duty/interest approach to qualified privilege might make it difficult for bloggers to rely on the defence, whereas a more generalised focus on public interest would not necessarily run into this problem. For example, Charleton J characterised the duty of the journalist to seek out and publish information of public interest as a matter of “professional skill and training” and a matter “of responsibility”; and he referred to “subject matter of a publication, be it an article or radio or television report” as gaining the defence. The overtones of professional journalism in this characterisation might exclude citizen-journalists or other non-journalist whilstleblowers from the defence; and it is difficult to see why this should be so as a matter of principle or logic: there are other examples of publication, from the long-established public speech or political handbill to the multifarious means of twenty-first century electronic communications; and public speakers, pamphleteers, bloggers and whistleblowers, no less than professional journalists, may in any given set of circumstances come under a duty to bring a matter of public interest to general attention, and should not lose the protection of this defence merely because they are not card-carrying members of the NUJ.

Conclusion
Captain Moonlight wondered at the fate of the Defamation Bill, 2006 and in particular of its proposed defence of Fair and reasonable publication?. It is a very good question. Despite its title, section 24(1) of the Bill does not in fact provide for a workable defence of fair and reasonable publication; Leech is a much better stab at it. If and when the Bill comes back to the Seanad, it is to be hoped that s24 is recast along its lines. If it is not, then the question will arise as to how much, if at all, of Leech, would survive the enactment of the Bill. If it represents the incremental development of the common law, then the Bill once enacted would displace it. On the other hand, if it has a constitutional basis (admittedly, there is no hint of this in Charleton J’s judgment), it would be harder for any statute to displace it. Perhaps the Supreme Court, if it gets the opportunity to hear the appeal in Leech, might clarify all of this.

In the meantime, I wonder what Gavin might think of all of this?

16 Reply to “Defamation, privilege, and a public interest defence, in the Irish High Court”