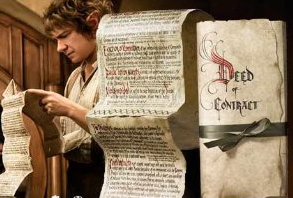 Thorin: Give him the contract.
Bofur: Alright.
[Background commotion]
Bilbo: [pleading for order] Please.
Bofur: We’re off.
Balin: It’s just the usual; summary of out of pocket expenses … time required … remuneration … funeral arrangements … so forth.
Bilbo: Funeral arrangements?
[Bilbo reads the contract, muttering to himself as he goes]
Bilbo: Oh … “up to but not exceeding one fourteenth of total profit if any”. Seems fair. … Ah … “Present company shall not be liable for injuries inflicted by or sustained as a consequence thereof, including but not limited to lacerations, evisceration … incineration”?
Bofur: Oh, aye. He’ll melt the flesh off your bones in the blink of an eye.
[Bilbo groans gently]
Balin: You alright, laddie?
Bilbo: Yeah, I’ll be. … Feel a bit faint.
Bofur: Think furnace, with wings.
Bilbo: Yeah, I-I-I need air.
Bofur: Flash of light, searing pain, then poof, you’re nothing more than a pile of ash.
Bilbo: Hmm … [long pause] … No.
[Bilbo faints]

Concentrating on the formation of the contract, and its text, many questions arise, of which three are particularly interesting. First, is there an agreement (the equivalence of offer and acceptance) sufficient to amount to a contract? The contract suggests that Bilbo made the offer, which the dwarves accepted. However, the dwarves’ purported acceptance added terms, which suggests that it is a counter-offer and not an acceptance. On one reading, when Bilbo signed the contract, he accepted the counter-offer; at which time, the agreement between them amounted to a contract. Update: on another reading, having rejected the dwarves’ counter-offer the night before, when Bilbo presses his signed contract upon the dwarves, he is only making a further counter-offer, and it the dwarves who accept.

Either way, to be enforceable, contracts need not just an offer and acceptance but also a commercial price, called consideration. On the question of whether there is consideration for Bilbo’s contract with the dwarves, building on the reference to “one fourteenth of total profit” in the script, the replica expansively provides for the dwarves’ consideration in return for Bilbo’s participationa:

Wherefore and for which the Company promises the whole amount, to give and to pay to Burglar or to Burglar’s accredited messenger one fourteenth of total profits, if in gold then good and of correct weight, and if other than gold, then of good quality and of correct and proper measure, within one year of the completion of the Adventure.

If, however, Company does not make good on payment herein set forth, Company becomes liable for the whole amount, to give to Burglar, making the stipulation, the penalty of the double of the said amount, the aforesaid conditions remaining as settled. Furthermore, Company pledges to Burglar as security for the aforesaid promises all its goods existing and future.

The above is binding with the exception and special reservation that if the amount of goods, property, and merchandise paid thereby is transported by a third party [or indeed by parties of any other denomination or enumeration], whose safety cannot be guaranteed in any case, and furthermore the said goods, property, and merchandise fail to arrive at the destination nominated by the Burglar, then and in such a case the present instrument is cancelled, void, and of no value.

Let the present instrument also be cancelled if the said Burglar refrains from asking or exacting payments of the aforesaid amounts of money, goods, property or merchandise for the space of one year after the time or the time limit has elapsed for asking, exacting or obtaining said payment.

Without limiting the foregoing, Burglar expressly and forever waives any and all claims that Burglar may now or hereafter have in respect and in any jurisdiction to the so-called “Moral Rights” with respect to the Recovered goods. Burglar understands that he embarks upon this Adventure at his own financial as well as personal risk.

This is a wonderful parody of old-fashioned drafting – update: intentionally so, as this interview with Daniel Reeve, the artist and calligrapher who created the contract demonstrates – but I’m not sure Ken Adams would approve.

Finally, and perhaps most interestingly, there is the question of whether the purported contract is unenforceable for illegality? After all, it is a contract in which Bilbo is to be a burglar (perhaps not a million miles away from a highwayman). It may be that “burglar” as used in the contract is not really a thief, but simply a shorthand for the contracting party who helps the dwarves recover the treasure that is rightfully theirs. Furthermore, even if Bilbo really can be described as a burglar, is stealing from Smaug really theft? In particular, can a dragon own private property? (In my view, in a universe with very few humans, and many hobbits, dwarves, elves, orcs and trolls, as well as super-powered rhosgobel rabbits and sapient great eagles, many creatures have and hold property; and, although Smaug is the villain of the piece, the fact that he is a dragon is not of itself a reason to conclude that he cannot own property, given all the other creatures that can and do in Middle-earth.)

As the trilogy unfolds, there will no doubt be questions relating to the interpretation and performance of the contract. Meanwhile, enjoy the movie! I certainly did.

Update (18 January 2013): Read a Lawyer’s Amazingly Detailed Analysis of Bilbo’s Contract in The Hobbit by James Daily on Wired. After a very long but extremely entertaining post (effectively summarizing his majesterial six-part analysis of the contract on the Law and the Multiverse Blog, which is linked at various places above), these are his closing thoughts:

One the whole, the contract is pretty well written. There are some anachronisms, unnecessary clauses, typos, and a small number of clear drafting errors, but given the contract’s length and its role in the film (which is to say not a huge one, especially in the particulars) it’s an impressive piece of work. I congratulate prop-maker and artist Daniel Reeve on a strong piece of work. …

Update (28 January 2013): but where would a concurrence be without a dissent? Jeremy Telman enters a partial dissent on the ambiguity of the consideration, and the failure of the contract to specify the manner of delivery of payment to Bilbo.

3 Reply to “The Contract in The Hobbit”