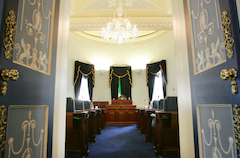 This is the second in a series of posts on Senator Seán Barrett‘s Private Members’ Bill, the Universities (Development and Innovation) (Amendment) Bill 2015, which was discussed last week in the Seanad (the first post is here). Section 5 of the Bill provides a definition of “academic tenure”. As the Explanatory Memorandum explains

… the protections afforded by academic tenure allow academics to investigate unfashionable, controversial, or distasteful topics or dissent from received wisdom, and to teach and publish their honest conclusions, without fear of external pressures (for example, from university donors, vociferous critics, or government) or internal censure (for example, by means of suspension or dismissal).

Against that background, and building upon international best practice and upon definitions in the statutes of TCD, UCC and UCD, section 5 of the Bill would have filled that gap. Perhaps reflecting Prof Hedley‘s criticism of the provisions relating to tenure in his earlier Higher Education and Research (Consolidation and Improvement) Bill 2014, Senator Barrett took a very different approach in this Bill. Section 5 would have inserted a new section 14A into the 1997 Act. In particular, section 14A(1) would have provided:

To preserve and promote the principles of academic freedom provided for in section 14, and to provide security against arbitrary dismissal, the principle of academic tenure guarantees that the employment of officers [ie, full-time permanent members of the academic staff of the university] shall not be terminated, except—

Furthermore, section 5(3) of the Bill would have removed the problematic reference to “tenure” in section 25(6) of the 1997 Act, and replaced it with a reference back to the new section 14A.

Hence, section 5 would have allowed academic experts to engage in important public debates without fear of retaliation; but it would protect them only in respect of matters within their contracts of academic employment, and provides security only against arbitrary dismissal. As paragraphs (e) and (f) make expressly clear, the principle of academic tenure does not preclude dismissal for legitimate disciplinary reasons pursuant to properly adopted disciplinary procedures. However, the Minister for Education and Skills, Jan O’Sullivan, effectively dismissed this draft. During the Second Stage debate, she said

I understand that there is a view that the 1997 Act does not sufficiently separate the question of academic tenure from matters relating to disciplinary processes in the employment relationship. However, I am advised that the proposed amendment would not substantially improve matters in this regard and may introduce unnecessarily cumbersome procedures.

This might have been a valid criticism of the tenure provisions in Senator Barrett’s earlier 2014 Bill, but it is misplaced in respect of section 5 of his 2015 Bill. In particular, the Minister’s “may” here is misleading in its ambiguity. Universities already have the suspension or dismissal procedures mentioned in paragraph (e) and the physical or mental infirmity procedures mentioned in paragraph (f); and the aim of section 5 as a whole was to ensure that tensions between these procedures and the principle of academic tenure are resolved without providing for unnecessarily cumbersome procedures.

Responding to Prof Hedley’s criticisms of his 2014 Bill’s provisions relating to tenure, Senator Barrett commented that

The issue of tenure is not a simple one. I would have liked to start from a blank slate here but wasn’t given the opportunity.

He took that opportunity in this Bill, and it is a very great pity that the Minister was not more enthusiastic about his new approach.