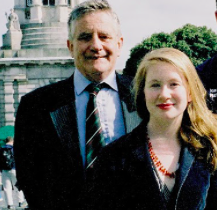 This is the third in a series of posts on Senator Seán Barrett‘s Private Members’ Bill, the Universities (Development and Innovation) (Amendment) Bill 2015, which was discussed last week in the Seanad (earlier posts are here and here). Senator Barrett is pictured left, with one of his research assistants, Ursula Ní Choill, to whom, with Dr Charles Larkin, his other research assistant, he paid very warm tribute at the start of the Second Stage debate. Section 6 of the Bill relates to university funding. This section dealt principally with rates, scales or ranges of remuneration; and a wide definition of remuneration was provided in section 2(1) of the Bill (indeed, this definition would have been wider than the references in section 25 of the Universities Act, 1997 (also here) or the definition provided in the Heads of a Universities (Amendment) Bill, 2012 (pdf)).

Section 6 of the Bill distinguishes between payments from the Oireachtas to the universities via the Higher Education Authority (HEA) pursuant to section 12 of the Higher Education Authority Act, 1971 (also here) (which it calls “section 12 funding” – see section 6(12) of the Bill), and payments from other sources. Having drawn that distinction, section 6 then applied it, so that “section 12 funding” would carry with it a greater level of government engagement, whilst funding from other sources would enjoy a greater level of institutional autonomy.

Here and elsewhere, the Minister for Education and Skills, Jan O’Sullivan, speaking at the Second Stage debate, rejected any role for the Commission “whose job is basically not in this area”. This may be so, but it was simply an excuse to reject the principle of independent arbitration. The structure of the Bill would have allowed for any independent arbitrator, not necessarily the Commission. It proposed the Commission since that was already there, but a specialist independent arbitrator, whose job – in the Minister’s words – would basically be in this area, would not be difficult to draft or establish. Update: indeed, given the subsequent establishment of a Public Service Pay Commission, this is a task which that Commission could appropriately perform.

The government is thinking about going further in its control of university finances. For example, the Government recently published its Legislative Programme for Spring/Summer 2015 (pdf); and in Section A of that programme (which relates to Bills expected to be published during the current session of the Oireachtas) there is a reference to a Universities (Amendment) Bill – to give the Minister for Education the power to require universities to comply with government guidelines on remuneration, allowances, pensions and staffing numbers in the University sector. The Heads of that Bill were published in 2012 (pdf). They were controversial at the time. Given the Minister’s comments at the Second Stage debate of the Bill, it is likely that this will be rolled up into the more comprehensive Higher Education Reform Bill which she is now promising is imminent. And if there is little change between the 2012 Heads and this aspect of the Minister’s forthcoming Bill, then doubtless further controversy is in the offing. The 2012 Heads provided for a very heavy-handed means of ensuring compliance with government guidelines on remuneration, including a very cumbersome procedure for the appointment of a person to exercise the functions of the university in respect of remuneration. Section 6 of the Bill would have provided for a different approach. Building on the distinction between section 12 funding and other funding, section 6(4) of the Bill (inserting a new section 20A into the 1997 Act) would have afforded the Minister the power to give a direction relating to section 12 funding (section 20A(1)) with which the university would have to comply (section 20A(2)); and if it did not, then the Minister could simply invoke the existing compliance procedures in section 20 and section 21 [as amended by section 6(5) of the Bill] of the 1997 Act (rather than the unwieldy and draconian procedures proposed in the 2012 Heads).

Unsurprisingly, the Minister rejected this approach out of hand, on the grounds that it was not in line with the government’s general policy with regard to public service pay:

The effect of section 6 would be to give university staff a privileged position within the public service in terms of pay policy determination. The Bill would restrict the capacity on the part of the universities to manage pay rates, and it would restrict the capacity of the relevant Ministers, the Government and the Oireachtas to manage pay policy in the universities. It would create a potential risk of additional and uncontrolled Exchequer pay and pension liabilities in respect of the university sector, …

It is simply not the case that section 6 would have restricted the capacity of the universities to manage pay rates; quite the contrary, its aim was to afford them a degree of flexibility that is lacking at present. But the Minister is right that section 6 would have restricted the capacity of the Government to manage pay policy in the universities; it would have done so by restricting the powers of the Minister in this regard to funding provided directly by the Oireachtas (section 12 funding); and it would have provided a rather freer hand to the universities in the disbursement of funding from other sources. This is the issue of principle at the heart of Senator Barrett’s Bill. It would have rendered unto Caesar that which is Caesar’s, in that it would have accepted the principle of Oireachtas control over Oireachtas money. But it would not have afforded similar Oireachtas control over money from other sources. Moreover, accepting the principle of public oversight, section 7(3) of the Bill, (slightly amending section 51 of the 1997 Act), would have preserved the duty of the universities to provide the HEA with information relating to university staff, including their remuneration, “whether out of section 12 funding or otherwise”. It would therefore have made no change whatsoever to the present system of the reporting of university accounts to the HEA or to the ultimate scrutiny of those accounts by the Oireachtas.

Unsurprisingly, however, the Minister did not wish to relinquish control over any aspect of university finances. I suspect that this is where battle lines will be drawn when the Minister publishes her comprehensive Higher Education Reform Bill. On the one hand, reflecting the 2012 Heads, she will seek to extend government control over university expenditure. On the other hand, the universities will push back, especially in relation to income from non-exchequer sources.

So much for section 12 funding. The remainder of section 6 addressed funding other than section 12 funding. Recall that section 4 of the Bill would have amended section 13 of the 1997 Act relating to the functions of a university; in particular, section 4 would have amended section 13(2)(c), so that it would be among the functions of a university to

Predictably, however, the Minister rejected this. During the Second Stage debate, she said that would have created “a potential risk of additional and uncontrolled Exchequer pay and pension liabilities in respect of the university sector”. To see the error of this objection, the Minister need only have looked to section 8 of the Bill (discussed in the next post in this series), which would have would have allowed the universities to open a new pension scheme for future employees, independent of exchequer support.

Moreover, these provisions would have had the potential to address the casualization of academic employment and to create career structures for researchers in universities. In particular, the various references to “rates, scales or ranges of remuneration” paid of out funding other than section 12 funding envisaged the development of such rates or scales. As the Explanatory Memorandum notes,

those “scales” would effectively amount to a career path for university employees paid out of non-exchequer funding, who are at present largely post-doctoral researchers rather than academics. This would parallel the development of academic career structures built upon similar provisions in the 1997 Act. And a great deal of the relevant work has already been done by the recommendation of pay scales for researchers by the Irish Universities Association …

As he had done during the debate on Senator Barrett’s earlier Higher Education and Research (Consolidation and Improvement) Bill 2014, Senator John Crown picked up on this point during the Second Stage debate; he referred to “the bizarre health structure in this country” and continued:

The paradox goes further, however, to include the career structure in health care in universities and, more generally, in science and other areas where research is a focus. There are an extraordinary level of incentivised dysfunction in these areas which Senator Barrett’s Bill would go a long way towards correcting.

Taken together, the various innovations in section 6 were intended to create plausible boundaries between the twin demands of exchequer oversight and institutional autonomy. But the principles underlying these innovations are inconsistent with the increasing dirigisme of the Department of Education and Skills; and they were therefore rejected by the Minister. Time will tell whether any of them will resurface in the Minister’s imminent Higher Education Reform Bill.