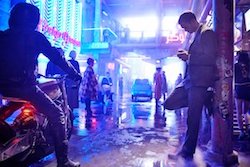 In his speech on leaving the US Presidency in January 1961, Eisenhower warned against the growing power of the military-industrial complex. In modern surveillance terms, we might term this the security-corporate complex. And we already have a word for when the military/security state goes bad, … That word is “dystopia”.

However, we don’t have a word for when the industrial/corporate society goes bad, … I think it’s beyond time we had one … I suggest that we need a word for “frightening company”, and that we can devise one by following the lead provided by More and Mill [in coining “dystopia” as a counterpoint to “utopia”] provides a guide. … Let’s keep “dys” [meaning “bad”] as the prefix, and look for a suitable word to which to add it. Greek provides “aguris”, which means “crowd” or “group” … Hence, from “dys” meaning “bad”, and “aguris” meaning “crowd” or “group”, I suggest “dysaguria”, as a noun meaning “frightening company”, and “dysagurian” as the adjective…

In my view, therefore, “dysagurian” is the perfect word to describe the society in Mute‘s Berlin in 2052.

Update: Mute did not find favour with Donald Clarke in the Irish Times. Further update: I’m with Donald on this; for all the production values, the movie is curiously flat.

One Reply to “From Mute to Dysaguria”