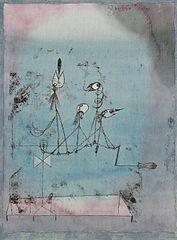 Veteran Irish journalist Vincent Browne presented the late-night political talk show Tonight with Vincent Browne on what was then TV3 from 2007 to 2017 (the programme is now The Tonight Show hosted by Ivan Yates and Matt Cooper on Virgin Media One). His famously waspish and curmudgeonly demeanour permitted him to adopt a technophobic persona, dismissing the considerable (almost cult) online following as “the twitter machine” (the twitter hashtag was #vinb; from small beginnings, it grew to become a vital part of the show; and nostalgia still drives some traffic).

Those halcyon days of Irish political twitter came back to me reading a review of Richard Seymour’s The Twittering Machine (Indigo Press, 2019) by Peter Conrad in The Observer the weekend before last. Here are some extracts, which give a sense of the review and a flavour of the book, as well as an explanation both of the book’s title and of the Klee painting (above left):

Technology, as Richard Seymour says, always boasts of possessing superhuman powers, which is why it arouses our wary paranoia. … The twittering machine, as Seymour calls it, has no innate morality, but it preys on our weaknesses to monopolise our attention and modify our behaviour …

The title of Seymour’s inflamed polemic comes from a painting by Paul Klee, in which a row of avian predators “squawk discordantly”, enticing victims into a bloody pit. As Seymour hears it, what ought to be a lyrical dawn chorus has become a “cyborg roar”, … the whole apparatus exists “for the purpose of human damnation” …

I want to take issue here, neither with Seymour’s thesis, nor with Conrad’s review, but with The Observer‘s headline: The Twittering Machine charts our descent, not “into a digital dystopia”, but into a dysaguria. As I have argued several times on this blog (especially: 1, 2, 3, 4, 5), whilst “dystopia” is an excellent word to describe a frightening state and its frightened society, it is not particularly apt to describe a frightening company and its frightened society. We need better terminology to describe a world of surveillance capitalism where big data companies battle to collect our data and control the world. Following the coinage of “dystopia”, From “dys” meaning “bad”, and “aguris” meaning “crowd” or “group”, I suggest “dysaguria” as a noun meaning “frightening company”, and “dysagurian” as its attendant adjective. If so, then The Twittering Machine charts our descent into a digital dysaguria. [Update: some of it is sketched in this extract from the book: The machine always wins: what drives our addiction to social media]. It is not a pretty destination, and it’s well past time we had the appropriate terminology to describe it, the better to understand it, and to avoid it before it’s too late.