This is the fifth post (in a series of seven; see also parts I, II, III, IV, VI and VII) discussing Samsoondar v Capital Insurance Company Ltd (Trinidad and Tobago) [2020] UKPC 33 (14 December 2020) (Samsoondar) and Surrey County Council v NHS Lincolnshire Clinical Commissioning Group [2020] EWHC 3550 (QB) (21 December 2020) (Surrey). In my first post, I introduced the cases and issues. A claim to restitution for unjust enrichment failed in the first but succeeded in the second. In my second post, I examined whether the defendants were enriched at the expense of the plaintiffs. In my third post, I considered whether compulsory discharge of the debt of another could have provided a cause of action in Samsoondar and Surrey, and whether Surrey could rely upon a policy-motivated cause of action, consisting in the unlawful obtaining or conferral of a benefit by a public authority. In my previous post, I considered whether the mistaken discharge of the debt of another might have been available on the facts of both cases. In this post, I want to consider the effect of voluntariness in the discharge cases.

We saw in my second post in this series that a voluntary payment from the plaintiff to a third party will not discharge a debt owed by the defendant to the third party, so that the defendant will not be enriched at the plaintiff’s expense. But the fact that the payment was voluntary has a second effect: it also means that an unjust factor based upon the lack or impairment of consent, intention, or voluntariness is not established either. A strong example is provided by Owen v Tate [1976] QB 402 (CA); the defendant had taken a loan from a bank, secured by way of a legal mortgage over the property of a friend; the friend was then replaced as guarantor by the plaintiff. After the bank recovered from the plaintiff, he sought to recover in turn from the defendant. The case turned on the Court of Appeal’s characterisation of the plaintiff’s actions in replacing the friend as guarantor as voluntary and not compelled; and the plaintiff’s claim therefore failed. (The case states the voluntariness rule, though it applies it controversially; see Conister Trust Ltd v John Hardman & Co [2008] EWCA Civ 841 (21 July 2008) [68] (Collins LJ; Laws and Waller LJJ concurring); see also Brazzill v Willoughby [2009] EWHC 1633 (Ch) (10 July 2009) [214] (Smith J);Ibrahim v Barclays Bank [2013] Ch 400, [2012] EWCA Civ 640 (16 May 2012) [39] (Lewison LJ)). In any event, an unrequested payment by a surety where the principal debt is not in fact due is a voluntary payment (The Zuhal K and the Selin [1987] 1 Lloyd’s Rep 151, 156 (Sheen J); the Zuhal K is pictured below, right). 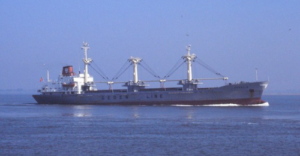 The leading Irish case is Hackett v Smith [1917] 2 IR 508 (CA). The plaintiff was the owner of property which the defendant had leased, and the tenant had the duty under the lease to pay for all “impositions”. The local authority served upon the plaintiff a notice to abate a nuisance. However, the plaintiff was a minor and ward of court, the notice of abatement was served upon the receiver of his estate, who merely handed it over to the solicitor “having carriage in the minor matter, who thereupon brought it to the notice of the Lord Chancellor, and an order was made directing that the required works be carried out” ([1917] 2 IR 508, 515). The plaintiff sued the defendant, claiming to have discharged an “imposition” which it was the defendant’s duty to pay. Campbell CJ grudingly accepted that the plaintiff could in principle sue on the basis that he had been compelled, but he held that where the plaintiff had a defence, he could not be said to have been compelled, and was instead “a mere volunteer” (at 520). Given that failure to comply with the particular notice on the facts did not “subject the person served to any liability for a penalty, prima facie or otherwise” (at 529), Campbell CJ held that there was no compulsion, and the payment was therefore voluntary. Two points therefore emerge from Hackett v Smith: first, support for the proposition that an action will lie for the compulsory discharge of the obligation of another to supply a service, and, second, a holding on the facts that the plaintiff was not so compelled.

The voluntariness at issue in cases like Owen v Tate and Hackett v Smith is often described as “officiousness”, but that deprecatory characterisation adds nothing to the conclusion that a plaintiff who has acted voluntarily does not establish an unjust factor based upon the lack or impairment of consent, intention, or voluntariness; in the interests of clarity of analysis, the term is therefore best avoided. In most of the discharge cases, the plaintiffs’ lack of consent is argued to have arisen by compulsion pursuant to a secondary liability; and so the statements of principle oppose voluntariness and compulsion. However, if mistake counts as an unjust factor in discharge cases, then it too should be admitted into these statement of principle on the side of compulsion.

The fourth essential precondition of a claim to restitution for unjust enrichment – whether there are any reasons why, even where an enrichment can be regarded as ‘unjust’, restitution should nevertheless be denied to the plaintiff – essentially focuses upon the availability of defences. We have seen in previous posts (here and here) that an enrichment can be unjust if it is, for example, conferred pursuant to a mistake or compulsion – here, the plaintiff does not properly consent to the defendant’s enrichment, does not intend to enrich the defendant, and does not act voluntarily (eg, David Securities v Commonwealth Bank of Australia (1992) 175 CLR 353, 378, [1992] HCA 48 (7 October 1992) [43] (Mason CJ, and Deane, Toohey, Gaudron and McHugh JJ in a joint judgment) (mistake); Rogers v Louth Co Co [1981] IR 265 (SC) 271; [1981] ILRM 143, 147 (Griffin J) (compulsion)). However, if, in such cases, the defendant demonstrates that the enrichment was, or should be taken to be, voluntary, the effect is to preclude reliance upon the argument that the plaintiff did not intend to enrich the defendant. Voluntariness provides an answer to an element of the intention-based cause of the action, and thus constitutes a defence to a claim arising from an intention-based unjust factor, such as mistake or compulsion.

We have also seen in a previous post that an enrichment can be unjust if constitutes the unlawful obtaining or conferral of a benefit by a public authority. This unjust factor turns on the application of a strong public policy; and consent, intention, or voluntariness, are not elements of that cause of action. It is, therefore, irrelevant whether the defendant can demonstrate that the enrichment was, or should be taken to be, voluntary, since it will not provide an answer to an element of the cause of the action. The fact that an enrichment was voluntary would not, for that reason, defeat a claim based upon an unjust factor that is not based on lack of consent, intention, or voluntariness.