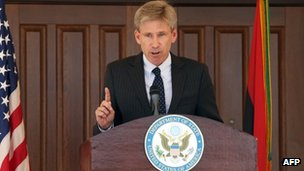 Assassination is the extreme form of censorship.

Given my recent post about cross-border hate speech, I was unsurprised to find that freedom of expression is once again in the cross-hairs in the wake of the assassination last Tuesday of J Christopher Stevens, the US Ambassador to Lybia (pictured), and three of his colleagues. The attack seems to have been sparked by a controversial American anti-Islamic movie, and there have been calls for those responsible for the movie to face criminal charges. On the Opinio Juris blog, Peter Spiro [hat tip Volokh] seeks to chart a means by which this might be done in the US without running afoul of the First Amendment, making a point similar to that made by Banks and discussed in my earlier post:

And the First Amendment? Call me a relativist. We have some pretty good empirical data from the scores of other countries that ban hate speech (in part through signing on to article 20 of the International Covenant on Civil and Political Rights) that a permissive approach to hate speech is not a prerequisite to functioning democracy. On the contrary, our European friends would argue that democracy is better served by banning such material. Either way, our exceptionalism on this score doesn’t serve us very well.

In particular, he argues that the US Constitution should bend, and has bent, to international law, even when it implicates the constriction of rights (others make similar arguments). Hence, ratification of the ICCPR, and adoption of Article 20, without the existing reservation, would found a basis to limit the First Amendment and allow for the criminalisation of hate speech in the United States.

Mark Movsesian objects on several grounds. First, he points out that a ban on “hate speech” wouldn’t have applied to the movie in question, “which was not likely to incite violence against anyone, except perhaps the film’s producers” (who are still shrouded in some mystery). Instead, Movsesian thinks that the category Spiro is looking to circumscribe “is ‘offensive’ speech, specifically, speech that would offend listeners’ religious sensibilities”, which goes much further than US principles would probably be able to accommodate. Second, he argues that, in practice, a ban on religiously offensive speech would mean a ban only on speech that offends particular segments of Muslim opinion, and he wonders whether American public opinion really is ready for a rule that would forbid speech that offends the followers of only one religion.

We have been here before; no doubt, we will be here again. Whenever there is a tragedy, there are populist demands that something must done; and when the tragedy can be linked – however tenuously – with inflammatory speech, the something that is demanded to be done is often the penalisation of that speech. But this exactly the time when it is important to defend that speech, however hateful it is. Prescribing silence out of fear only engenders more fear, not safety. The law in the US, consistently with the First Amendment, already penalises specific threats of violence or incitement to imminent violence. Even the European Court of Human Rights requires a strong degree of direct connection between the incitement and the violence sought to be prevented, for restriction of that incitement to be compatible with the European Convention on Human Rights.

However, to go further is to capitulate to populist panic, and risk losing free speech in an effort to placate those who object loudest. Freedom of speech, if it means anything, requires freedom for the thought we hate, for the words that offend, for the art that calls our very beliefs into question. This is so, even where the thought is badly formed, the words are badly expressed, and the art is badly done – indeed, I suspect that nobody will confuse the movie in question with The Satanic Verses. Otherwise, we give the heckler the veto over what we can say and what we can hear. Bring the perpetrators of violence to justice, but don’t silence everyone else. As Shaw observed (later in the same preface from which the opening quote above is taken):

The toleration of heresy and shocks to morality … and even their protection against the prejudices and superstitions which necessarily enter largely into morality and public opinion, are essential to the welfare of the nation.

Nothing, however vile, justifies censorship

Even in the hardest of cases such as this anti-Islamic film, the old arguments against censorship remain the best

The friends of freedom should not make exceptions because freedom’s enemies never do. … [The movie in question] is one of the hardest cases for liberals I’ve come across. But even this tawdry piece of work raises problems for the proponents of censorship. The first is a problem with language. Mount a critique of Islamist religious fanaticism, and it is only a matter of time before you find that defenders of religious reaction have hijacked liberal language. …

Even in the hardest of cases, the old arguments against censorship remain the best. The makers of [the movie in question] have reactionary religious prejudices and probably reactionary racial prejudices too. Reactionaries are not hard to beat in open debate. If you can’t beat them without calling for the cops or reaching for a gun, you should get out of the debating business and make way for someone who can.

Second, by Glenn Greenwald on the Guardian‘s Comment is free:

Conservatives, Democrats and the convenience of denouncing free speech

… The claim that political speech should be suppressed because it is intended to “inspire” or “provoke” others to commit violence has been the favorite tactic of censors and free speech enemies for decades. Indeed, every single tyrant who wants to suppress political speech does so by claiming that the ideas being expressed are more than mere “political opinion”: it is “incitement” to violence, they invariably claim. … But the US supreme court, in the 1972 case NAACP v Claiborne, unanimously rejected that pernicious theory, holding that there would be no meaningful free speech if speech could be proscribed on the ground that it “inspires” others to commit violence …

… In sum, free speech is not intended to protect benign, uncontroversial, or inoffensive ideas. Those ideas do not need protection. It is intended to protect – to foster – exactly those political ideas that are most offensive, most provocative, most designed to inspire others to act in the name of its viewpoints. One could say that every significant political idea, on the right and the left, has that provocative potential. If speech can be constrained on the ground that it can inspire or provoke violence by others, then a wide range of political ideas, arguably the only ones that really matter, are easily subject to state suppression.

One Reply to “Assassination and censorship”