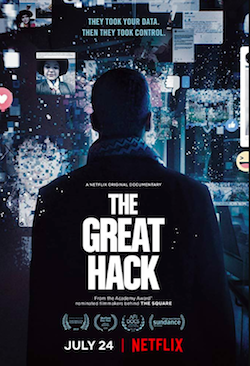 The Great Hack has just dropped on Netflix (IMDB | Rotten Tomatoes | wikipedia | poster left). It is a documentary that explores “how a data company named Cambridge Analytica came to symbolize the dark side of social media in the wake of the 2016 US presidential election”. Much has already been written about the Cambridge Analytica scandal (eg ICO here and here (pdfs) | Carole Cadwalladr in The Guardian), and a great deal more will be written as the movie is reviewed in the coming days. I don’t propose to add to those torrents here. Rather, I simply want to observe that there is a word for a company that symbolizes the dark side of social media.

Reacting to Thomas More’s coinage of “utopia” as the “perfect state”, from the Greek “eu” meaning “good”, and “topos” meaning “place”, John Stuart Mill coined “dystopia” as the “frightening state”, from the Greek “dys” meaning “bad”, and (again) “topos” meaning “place”. But, whilst “dystopia” is perfect to describe a “frightening state” and its frightened society, it is not particularly apt to describe a “frightening company” and its frightened society. Indeed, we don’t really have the words for when a corporate society goes bad; “dystopia” and “dystopian” have been pressed into service (even in the context of reviewing The Great Hack: “Watching this film, you literally start to wonder if history has been warped towards a sickening dystopia”); but the warped society in that movie is very different to the warped society in classic dystopian fiction (such as, to take the obvious example, Orwell’s 1984). We can’t easily discuss a phenomenon until we have the proper words to describe it. As a consequence, in a world of surveillance capitalism where big data companies battle to collect our data and control the world, I think we urgently need to devise appropriate terms for frightening companies and frightened societies. One way to do so is to follow the lead provided by More and Mill. Let’s keep Mill’s “dys” as the prefix, and look for a suitable Greek word, analogous to “topos”, to which to add it. “Aguris”, which means “crowd” or “group” (or “gathering”, “assembly” or “marketplace”, and which has already lent other words to modern English). Hence, from “dys” meaning “bad”, and “aguris” meaning “crowd” or “group”, I suggest “dysaguria”, as a noun meaning “frightening company”, and “dysagurian” as the adjective to describe that company and its frightened society.