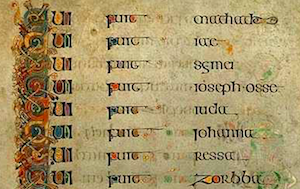 I was reminded of this when I recently read an article by Tom Lamont about the effects of electronic typos: an SMS misdirected to a wrong mobile phone number (leading to a marriage!); a satnav directed to Rom (in Germany) rather than Rome (in Italy); a jet from Sydney directed to 15 degrees 19.8 minutes east (and landing in Melbourne) rather than 151 degrees 9.8 minutes east) (bound for Kuala Lumpur). He calls these “butterfly-effect typos”, where a tiny typo can have enormous repercussions – and modern technology makes them at once more common and more catastrophic:

From a wrongful arrest to a life-saving romance: the typos that have changed people’s lives

In our digital world, a misdirected text or simple keyboard error can trigger huge unintended consequences

… We live in curious times, part-digital, part-manual. It’s a hybrid era that presumably won’t last for long, and in which we’ve come to rely on code and algorithms to handle many of our affairs, though usually with a human hand setting everything in train. Miracle tech! Unimaginable automation! And so much of it conditional on an accurate animal prod at the outset, a finger landed correctly on a keyboard, a thumb touching the right quarter-inch of screen, a mouse button clicked just so.

… In our almost-automated age, we tend to be asked to do our bit at the beginning of any enterprise, before a million digital processes occur quickly, incomprehensibly, out of sight. When things do go wrong, it can seem as if we’ve pushed the first domino in a long run and then turned away, trusting the dominoes will fall neatly. Err on that first nudge, and the consequences can be amplified far out of proportion to the initial mistake.

Two of the butterfly-effect typos collected by Lamont have legal consequences of interest to readers of this blog. First, in March of this year, when the European Parliament was undertaking its final consideration of the recent Directive on copyright (Directive (EU) 2019/790 of the European Parliament and of the Council of 17 April 2019 on copyright and related rights in the Digital Single Market and amending Directives 96/9/EC and 2001/29/EC), MEPs were asked to vote on whether they wanted to have a single round of voting on the entire reform, or individual votes on each of the amendments. A narrow majority voted in favour of the single vote; and, on that vote, the copyright reform as a whole was approved. But, it turned out that some MEPs had pressed the wrong button and voted the wrong way; and, without the errors, the majority would have been in favour of individual votes. But the error was not enough to invalidate the initial vote, and the Directive has been adopted.

Second, in 2009, an employee at Companies House, London, intending to wind up an insolvent Manchester business called Taylor & Son (note the singulars), instead wound up a thriving Cardiff business called Taylor & Sons (note the plural). After much hardship, the principal of the latter firm succeeded in an action for damages. In Sebry v Companies House and the Registrar of Companies [2016] 1 WLR 2499, [2015] 4 All ER 681, [2015] EWHC 115 (QB) (26 January 2015) Edis J held that the Registrar owes a duty of care when entering a winding up order on the Register to take reasonable care to ensure that a winding-up order is registered against the right company and not registered against the wrong company. An appeal was explored but not pursued, and the claimant was awarded almost St£9m in compensation (though the former employees are still out of pocket).

We have seen other consequences of such computer errors on this site. First, there are many examples of typos leading to under-priced offers of goods, services, holidays, and so on. When someone seeks to accept such offers, various questions arise: (1) is there a contract?; (2) if so, is it affected by the mistake?; (3) if not, (a) do its terms permit it to be cancelled; and (b) if so, are such terms fair?; (4) have any additional protections and cooling-off periods been complied with; and (5) if there are any claims, what are the available remedies? The issues are not entirely straightforward (see here, here, here, here, here, here, here, and here).

Second, typos can result in overpayments (add a digit or two to payment) or misdirected payments (intended for one person, but reaching another – for example, with a similar name). For instance, a German bank employee, intending to transfer €62.40, momentarily fell asleep with his finger on a keyboard, and ended up transferring €222,222,222.22! In a recent example, a bank intended to lodge €58,000 to one client of a firm of stockbrokers, but mistakenly lodged it to the account of another of the firm’s clients. Although problems with bank computers usually mean that credit card or online payments aren’t possible, sometimes they can make credit cards or ATMs appear generous. In all of these circumstances, the recipient of the overpayment or misdirected payment must has a duty to make restitution of the mistaken payment. Otherwise, retaining and spending the money could result in prosecution for theft, as the recipient of the misdirected €58,000 found out to his cost (see here, here, here, here, here, here, here, here, here, and here).

The extra ancestor in the genealogy of Jesus in the Book of Kells is not the only biblical typo. Indeed, biblical errata are legion, and often entertaining; for example, in various printings of the King James Bible:

Such errors can increase the value of the Bible in question: a 1717 printing of the King James Bible which heads Luke, chapter 20, as “The Parable of the Vinegar” (rather than: “… of the Vineyard”) sold for US$5,000 in 2008, and its estimated worth is now hundreds of thousands of dollars. Other rare book typos similarly increase the value of individual volumes: a first edition of a Harry Potter book with two typos recently sold for St£34,200. It is the same with errors on stamps – rare examples can be worth up to €500,000 or more. Perhaps the recent Irish moon landing stamp (pictured right), which mis-spells the Irish word for moon (and, by interchanging an “a” and an “e”, commemorates the 50th anniversary of the first landing on the Irish person [“ar an nGaelach’] rather than on the moon [“ar an nGealach’]), may one day provide another example. Meanwhile, be careful of fat finger, butterfly-effect typos; under-offers are too good to be true; and over-payments are not gifts from god.

3 Reply to “The legal effects of some butterfly-effect typos; including mistaken offers, and restitution of mistaken payments”