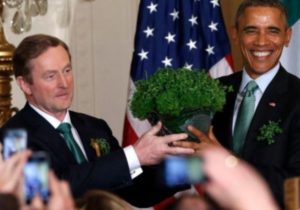 Last week, on 17 March, as the world celebrated Ireland’s national day in honour of St Patrick, the Taoiseach (the Irish Prime Minister) made the annual presentation of a bowl of shamrock to the President of the United States (pictured left). I seem to remember being taught in school that the reason the shamrock is one of Ireland’s unofficial national symbols is because St Patrick explained the Christian doctrine of the Holy Trinity by reference to the three leaves of the shamrock. I now work in a College named for the same Holy and Undivided Trinity. So, it might come as little surprise that I have recently been thinking about a trinity, though a rather more secular one. What I have in mind is the constitutional trinity on which many modern states are founded: liberal democracy and the rule of law.

All three elements of this trinity are multi-faceted, contestable, and elusive. Moreover, it is possible to conceive of a state which commits to one of the elements of this constitutional trinity, or even two, but – like a three-legged stool – they have become mutually reinforcing in many modern states, so much so that they often fade into one another both in popular conception and in more considered analysis. However, each element does contain some stability at its core. For the purposes of this post, I mean liberal in the sense that the state is committed to respect for and protection of individual rights; I mean democratic in the sense that citizens participate in government; and I mean the rule of law in the sense that, in a state founded upon a government of laws and not of men, the laws are equally applied in open court by an impartial judiciary.

First, I will take the elements of the rule of law as sketched by the late Law Lord, Tom Bingham, in his final book The Rule of Law (Allen Lane, 2010):

If liberal democracy and the rule of law together constitute the constitutional trinity on which many modern states are founded, and if there are strong liberal and democratic justifications for freedom of expression, then, in essence, my question is this: are there similarly strong free speech justifications founded in the rule of law? The answer I have floated in this post is that there are. Do you agree? Please exercise your free speech in the comments below.

10 Reply to “Free speech and the rule of law”